This past week of school was a short one as we had a day off for a public holiday! Everyone in the state of Queensland had Wednesday off so that they had the opportunity to attend Ekka. Ekka, short for the word exhibition, is Queensland’s largest annual show. Formerly known as the Royal Queensland Show, Ekka has been a tradition in our state since 1876. It was originally designed to be an opportunity to show off the latest agricultural and industrial achievements in the state of Queensland. Today, Ekka more resembles a state fair in that it has sideshows, animals, musical acts, and agricultural displays. Ekka attracts over 400,000 people per year, and is the reason that I didn’t have to attend class on Wednesday, “People’s Day.”

Ekka represents the best of Queensland, but I decided to use my holiday for a road trip to discover Queensland’s finest for myself. After renting a car and accidentally discovering a great pancake place, Troy, Steve, Ashley, and I set out for Girraween National Park. Besides transport from the airport, this was the first time that I had been in car in Australia, Because Australians drive on the left side of the road, I was excited to claim the passenger seat (on the left side of the car, rather than the right) and execute my roles as co-pilot, navigator, and designated DJ.

Navigating through the city in a car was pretty difficult, and I definitely did a better job navigating once we got onto the straight, country roads. Ashley and Steve slept for most of our drive, but I enjoyed taking in the views of the Australian bush. This was one of my first experiences in Australia that lined up with my expectations of “exploring Down Und-ah.” As we got further inland, we saw more red dirt, more cattle farms, and more wild animals (besides those pesky ibises).

As we got further away from the city, we saw more and more roadkill. We saw heaps of brown fur laying on the side of the road, which looked a lot like deer at home… until I noticed their long, thick tails. I was heartbroken to realize that these were dead kangaroos on the side of the road!
When we had about one hour left before arriving at the national park, Troy let me take the wheel! I was surprised at how easy it was to drive on the opposite side of the road. Granted, I was only pretty much driving down straight roads, but I think I did pretty well! I only struggled to remember that the blinker was on the right side and that it was the windshield wipers on the left.


When we arrived at the national park, we chose to hike the Pyramid Trail, which was level medium/ hard. I think it was the hardest hike I’ve ever done because at the end we had to walk straight up the face of the rock with an elevation of at least 60 degrees. Also, it was quite windy at the top of the mountain so Ashley and I ended up crawling up the mountain to make sure we weren’t blown off it!


Thankfully, we found an easier way down before heading to Lake Moogerah to watch the stars and see the Milky Way! I couldn’t get over how clear the stars were. It would have taken me all night just to count the number of stars in the smallest corner of the sky. While I sat and enjoyed, Ashley and Troy were dedicated to taking the best photos of the stars. (My iPhone was absolutely useless in this feat, so I’m borrowing their pictures to post here). They were even able to capture shooting stars in their photos!
Meanwhile, Steve found a wild koala in a tree! I had seen the koalas at the koala sanctuary, but I made it my goal to find one in the wild. Every time I went on a hike, I’d look for koalas’ signature parallel claw marks on the eucalyptus trees and keep my head up in hopes of seeing their little grey bodies curled up in the trees. When Steve said he found one, I no longer cared about the stars in the sky, and I ran over to see the koala. We could only really see it when we shined our flashlights at it so I was very torn between trying to get the best view of him and not wanting to disturb him. After fawning over the koala for a couple minutes, I decided to take a couple steps back and let him enjoy his eucalyptus in peace.

By the time I felt like I had gotten my fill of the stars and the koalas, I was feeling tired and cold so I decided to try to nap in the car. We didn’t leave for a couple more hours as everyone finished up their pictures and took a little rest. On the ride back to Brisbane, we were extra careful of kangaroos crossing the road. We saw two hop right in front of the car!


Although I was more than ready to jump right into bed by the time we returned to the city, we decided to stay for sunrise at Mt. Coot-tha. We could see the entire city from the top of Mt. Coot-tha, and we watched the city lights against the night sky fade as the sun rose just in time to remind me that I had to attend a lecture in just a couple hours. 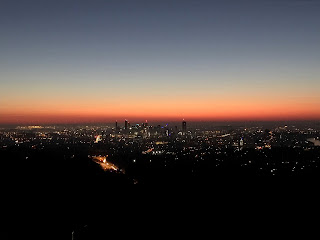 We returned to Urbanest for a quick power nap before my first lecture of the day. The exhaustion was absolutely worth the excitement of the previous day, and I was happy that I chose to spend “People’s Day” with some pretty cool people!