This weekend felt like the Ultimate Party (the name of our tour group was very fitting for the weekend we had) in Byron Bay. I went to Sydney with Ultimate Party, so I knew to expect a non-stop weekend in Byron Bay. The fun began on Thursday night when Ari, one of my good friends at Gannon and favorite travel buddies, arrived from Melbourne where she is studying for the semester. After catching up for a bit and introducing her to my new friends in Brisbane, we decided that Ari needed to experience the Brisbane night life for herself.

It wasn’t long before we were boarding a bus to Byron Bay the next morning. On the bus ride there, we stopped to check out Coolangatta Beach and Snapper Rocks, and I felt kinda special having been there before. When we finally arrived in Byron Bay, we realized we were starving so we made a beeline to a local burger place. I decided to try the special, which was a kangaroo burger with beetroot. The meat reminded me of the venison burgers that my dad makes at home. It was absolutely delicious, but I always feel torn eating one of my new favorite animals. 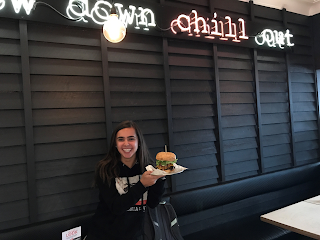 As soon as our tummies were full, we went right to the beach. Byron Bay is a total beach town, like Noosa where I was a couple weeks ago. Although both are beach towns, Noosa and Byron Bay have totally different vibes! In Noosa, I felt like there was an unspoken dress code (something like polos and Sperry’s for guys). Byron Bay had a strong hippy vibe and lots of street art, so it was totally fine for me to walk down the streets in just a bikini top and shorts. I was able even to get into the bars in BIRKENSTOCKS!!!!! Although I liked Noosa, I loved how comfortable Byron Bay felt. I was even able to fall asleep on the beach, which usually doesn’t happen as I tend to feel antsy on the beach. After a solid beach day, we went to Cheeky Monkey for dinner and a paint party.


The next morning was an early one as we woke up early to jump out of a plane... I had been reminding myself for 3 weeks that I would soon be going skydiving, but it didn’t really hit me until we arrived on site. I guess the best way to describe my emotion when we arrived would be giddy, rather than nervous. I thought of my mom telling me that she FORBADE me to skydive unless I bought the video and pictures, so I bought the photo package (and the insurance policy for good measure). Once we checked in, we watched planes take off and land (carrying slightly less cargo). I started to get nervous as I watched the tandem skydivers land because they descended so quickly!
Soon, it was our time to get harnessed up. We got some quick instruction before boarding our flight. Surprisingly, I felt very calm on the flight up. I like flying in general so I enjoyed looking out the window from 14,000 feet up. My skydive instructor, Walt, even pointed out humpback whales breeching from the plane. I was reassured to find out that Walt had been skydiving for 17 years, and that he had jumped once already that morning!

When we finally reached our max elevation, a rush of excitement entered my body just as the cold air entered the plane. Once the first person jumped out, everyone else filed out very quickly. I thought that being the second last to jump out would make me even more nervous, but everyone was sucked out of the plane so quickly that I didn’t have time to regret the decision.

When it came to be my turn, I dangled my feet over the edge of the plane and got into position (called the “Big Banana” position, which required me to have my legs bent and feet tucked under the plane, chin back so that my head rested against my instructor’s chest, hips thrust forward, and hands holding the harness). The first couple seconds out of the plane were the most horrifying, and I remember the initial panic of realizing that I was falling. I didn’t close my mouth the entire time I was free-falling because I was screaming as we spun through the air! I’m not sure how long we were free-falling before the parachute was pulled, but it didn’t feel very long. I was glad that Walt pulled the parachute before the ground appeared close and relieved that I didn’t have to worry about bugs flying into my mouth once free fall ended. 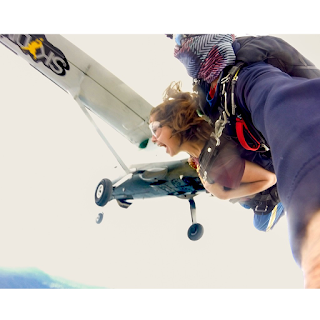 There was so much to take in on the way down. We had a view of the entire coastline, one of my friends even said that he could see the distinctive Gold Coast skyline as he descended. Everyone else said that they looked for whales, but I don’t think my thoughts were clear enough to look for specific things. I started to get nervous as we got closer to the ground, remembering how intimidating it was to watch the landings from the ground. I lifted my legs and landed safely on my butt, as planned. 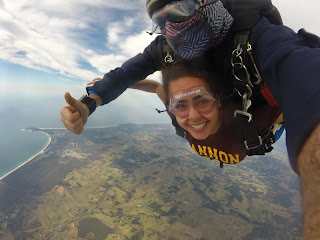 When I got to the ground, I thanked Walt for remembering to pack the parachute! Then I ran over to the rest of the group where we all high-fived and enjoyed our adrenaline rushes. I could feel the excitement in my gut and mostly in my heart. I was left with a feeling of “OK, WHAT’S NEXT?” I felt ready to try everything and was excited that I was supposed to have my first ever surf lesson that day. It was only 9:30 AM by the time we were done, but I felt more awake than I had in a long time. I thought about how skydiving is a more effective stimulant than the caffeine in coffee and therefore, a much better way to start the day! On the shuttle bus back to the hostel, Ari texted me to tell me that she had just woken up and finished breakfast, and I giggled at the thought that I had checked something major off my bucket list as the rest of the Byron Bay crew was waking up!

When I got back to the hostel, I had a couple of hours to kill before the surf lesson. I knew that if I laid down, the adrenaline rush would die out so we decided to try to hike to the Cape Byron lighthouse. Instead, we ended up at a flea market that we found on the way there. I was actually glad that we didn’t make it all the way up to the lighthouse because I remembered that we had to squeeze in lunch before our surf lesson as well. After our Açai bowls, we went to our surf lesson!


While I felt that skydiving was an amazing experience that I was glad I tried, I felt like I could actually see myself sticking with surfing and getting good at it! I found that getting up and balancing wasn’t too hard, but paddling and timing the waves was the hardest part. I was actually surprised that I was able to stand on the first wave! We surfed for about 3 hours and I was exhausted by the end – my arms couldn’t have paddled me any further even if I did find the perfect wave! My soreness and bruises on my legs prove how physically demanding surfing is!

Even though I desperately needed a solid night of sleep, my roommates and I decided that we were going to wake up at 4 AM to check out the meteor shower that was to be happening that night and then stay up for the sunrise! I was pleasantly surprised that all 8 of us woke up in time – and at least 10 other people in the group joined us as well. I only saw one shooting star, but it was cool to see all the stars from the beach. From there, we walked up to the Cape Byron lighthouse. The land that the lighthouse is on is considered to be the most easterly point of Australia, and I was amazed by the fact that we were able to see the sunrise before anyone else in Australia and most of the rest of the world! 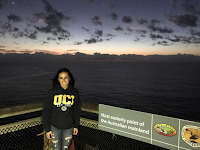 After we checked out of the hostel, we boarded the bus to leave Byron Bay and head towards Nimbin. The “hippy vibes” that we noticed in Byron Bay were amplified in Nimbin. Nimbin feels like a little utopian society, very unlike the rest of New South Wales. One of the things that makes Nimbin so unique is its marijuana counter-culture. Marijuana is illegal in all of Australia, but this rule is rarely enforced in Nimbin. In addition, there are strong focuses on sustainability and self-sufficiency within the community, and I noticed a strong appreciation for Aboriginal cultures in that little town. I was excited to hear a didgeridoo being played as I walked down the streets! 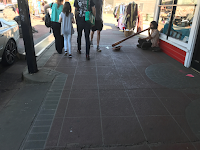 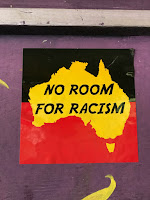 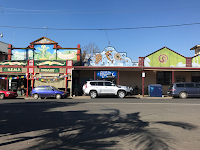 We returned to Brisbane, where Ari would be staying for one day longer before returning to Melbourne. I had to make sure that Ari experienced the best of Brisbane in just one day, so we did a quick excursion to the Lone Pine Koala Sanctuary and around the Southbank area. This was the first time that I was able to show my new home off to a visitor, which was a very exciting experience.

Overall, I’d say “exhilarating” and “exhausting” were two good words to describe the weekend!Before I left, I had my family help me come up with an "Australian Bucket List" of sorts. Aunt Marci's contribution was "to find a Hemsworth brother." I think I missed my best chance would have been in Byron Bay, where Chris Hemsworth lives, so I guess I missed my chance. Nevertheless, I had an amazing experience in Byron Bay.