This past weekend I (a relatively small mammal) had the opportunity to swim with one of the world’s largest mammals- the humpback whale! I had never snorkeled or been whale watching before, and a company called Sunreef in Mooloolaba offered the opportunity to do both at the same time! My roommates (Rachel, Gianna, Ashley, and Keiko) and I planned it as a roomie-bonding experience when they first arrived, and although we’ve all gotten really close since we planned it, that goal was definitely achieved as a result of this trip. 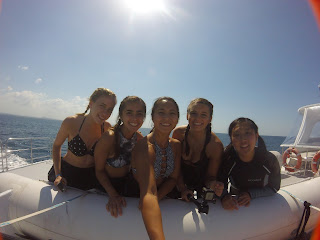 We woke up early on Saturday morning, to make the 8:20 train up to the Sunshine Coast. We all fell asleep on the train after doing each other’s hair so that we all had matching pigtail braids. We looked a little bit like a gang with our matching hair, but we joked that we were each other’s stunt doubles because it was really hard to tell us apart from behind.

When we arrived in Mooloolaba, we met up with Nolan. It wasn’t long after checking in that we got suited up in our snorkel gear. I had never worn a wet suit before, so as soon as they handed me all my equipment, I was all smiles. (Seriously, Gianna has a video of me with the dumbest possible grin on my face). I put my gear on right away, although it was quite difficult to walk around the docks in flippers as we waited for the boat. Our boat was called Croc One. It had “Crocs Rule” written on the back of it, which made me think of my dad (Love you Dad, but not your Crocs).

After we boarded the boat and got some instruction, the captain set us loose to look for whales. The goal was to intercept these curious creatures during their annual migratory journey up north for breeding. In the summer months, humpback whales hang out by Antarctica. The whales travel north along the coast of Australia during the winter months to give birth to their calves in the warmer waters of the Pacific. I took the job of looking for whales very seriously, as we climbed to the top deck to get a better view. They told us to look for little clouds above the water, formed by water coming out of the whale’s blowhole. We looked for grey and white bodies coming out of the water to get air, to slap their tails, or to breach.
We also looked for “foot prints,” which are calm areas amidst the rippled ocean formed by the whale’s tail slapping the water and distressing it. These footprints are created by the strongest muscles in the animal kingdom! I learned that each whale has a unique footprint, like each human has a unique thumbprint, so scientists can use these to keep track of which whales they are seeing. Keeping an eye on the footprints was a good way to keep track of the whales when they dove below the surface.

Our guide was very knowledgeable about the whales, and he told us that the best way to identify the difference between a female whale and a male whale is to look at its coloring. A male is likely to have more white scratches because when the males fight for mates, they scratch each other with their beaks. This, and the fact that she was swimming with a calf, helped us identify the first whale we saw as female.

When we came upon the mother and her calf, the mother whale was slapping her tail on the surface of the water repeatedly. Humpback whales slap their tails on the surface of the water to create a sound that will travel through the ocean in order to communicate with other wales. Usually the whale does a couple tail slaps at a time, but the mother whale was doing this repeatedly to teach her young calf.

We all got so excited to see the whales that we were all gasping and yelling out of sheer excitement. I was worried that we’d scare the whales, but the captain encouraged us to make noises because it gets the whales’ attentions, as they are naturally curious. They let us get really close to them, and when we were close enough, we suited up in full snorkel gear (including our shark deterring anklet) and jumped into the water. 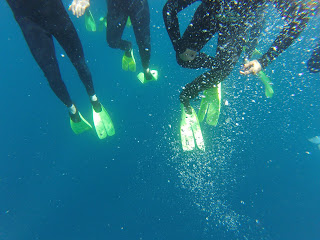 At first, I was just getting used to swimming with flippers and a snorkel. It took some adjusting to get used to breathing through my mouth instead of my nose, which would have caused my mask to fog up! When I finally got my breathing down, I looked into the water. I was alarmed that all I saw were jellyfish! They weren’t the big scary kind, but they looked like little clear donuts with short tentacles. I was more focused on avoiding the jellyfish than looking for whales, but I did see the whales – SWIMMING LESS THAN 10 METERS AWAY FROM ME!!!! The first time I saw the whale, I was in shock and I don’t think I completely registered what I saw! I only got a quick glimpse of the whale before we got back on the boat.


These whales were swimming away, so we had to go find some more who were interested in finding out about us. The next time we saw a whale, it jumped out of the water (breaching). Ashley and I were so in awe that we kept saying “Whoa” or “Oh My God” or just incoherent noises of amazement. It was so cool to watch, the whale even put his pectoral fin out of the water as if he was waving hello. Of course I had to wave back, and I even tried to speak whale. I had been joking about speaking whale forever, but something about this experience really brought it out of me.


The next time we jumped into the water to swim with whales, they swam away from us. We tried to swim up and catch them, but they were too fast so we got back on the boat and looked for more. It looked like we weren’t going to see any more whales up close, when all of a sudden a baby whale came up to breathe RIGHT NEXT TO our boat! It was so close that I was worried that the mother was going to come up right under our boat and tip us, but she broke the surface not too far behind her baby. We all ran to the bottom level of the boat and threw on our snorkel equipment and jumped into the water. I was able to see the baby calf so clearly beneath me (maybe 5 m away) that I choked on some ocean water.

The whales didn’t stay to hang out with us, but I was so content that me and the whale were able to capitalize on our mutual curiosity and share the same space. It was such a humbling moment to be in the open ocean with the whales. I was able to connect with one of the world’s largest mammals in the middle of the Pacific Ocean. I felt like I was fully immersed and capable of understanding and appreciating whale life. I felt love for the whale, my fellow mammal and creation of God, and it made me want to do everything I could to protect them. I had a death-grip on the Teddy Grahams wrapper I was holding as I looked over the rail of the top deck of the boat to admire the whales for fear that I would accidentally drop it into the ocean and pollute it.

When we got to the point where the water was warmer than the air (which I found out as we attempted one last jump), we headed back. I couldn’t be more thankful for the experience. As the boat headed back to the docks, we sat in on the top deck letting the sun hit our backs and dry our wetsuits. I was tired, but my heart was full. I am so blessed to experience the animal in a way that not a lot of other people do. I liked Sunreef as a company, and I liked the fact that they do not force interactions with the whales. The crew assessed how the whale was behaving before we decided whether or not we should join them in the water. It allowed me to experience whales the way they experience life themselves, outside of a tank, as they should be. I don’t think I will ever forget the experience of looking past all the jellyfish to see a baby whale in the open ocean!