I have officially spent a whole month in Australia! I cannot deny that I miss my family, especially as both of my parents have birthdays this week, but overall, I haven’t felt much homesickness! I have my friends and roommates to thank for this, as they are always eager to explore Brisbane or make plans for later in the semester. We have all gotten into a rhythm of offering up ideas of weekend excursions and breaking into smaller groups based on interest. So while I’m in Byron Bay next weekend, the rest of my friends will either be in Sydney, Cairns, or Noosa. Although we are great together, I am thankful that we are all comfortable making our own plans.

We all started class together last week at ACU! Although I am already one week in, I definitely don’t feel like I am in school mode for a few reasons. First of all, we only went over introductory information in most of my classes. There aren’t too many expectations so far considering that my grades are almost entirely determined by a couple projects and the final examination for each class. 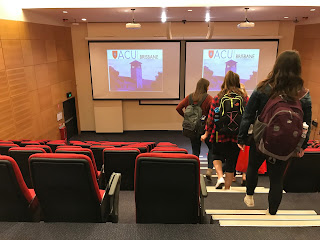 The other reason that I don’t feel like I am in school mode is because I am only on campus for about 3 hours per day. This is such a dramatic shift from home, where I literally LIVE on campus. Now, I show up just for lectures and tutorials, then go right back home. On Thursday, Leanne, Liz, and I were frustrated that the amount of time we spent getting to and from school almost exceeded the amount of time we actually spent in our Nutrition Tutorial. I have to give myself one hour to get from Southbank, where I live, to the ACU campus. To get there, I have to take a train for about 30 minutes, then take a shuttle from the station to campus. I usually take the train with friends so it is not too boring, but I tend not to mind the commute when I have to do it alone.

I have adjusted to the commute, but I have yet to adjust to the nature of campus. In the United States, campus is the center of student life rather than just a location of learning. At Gannon, I can always count on the fact that I will see people I know walking around, getting food, doing a workout and attending club meetings. Therefore, just being on campus itself is a good way of integrating yourself into the culture of the school at home. Here, however, students attend their classes, maybe study for a little, then go home. Club meetings are usually held elsewhere, as I found out when I considered joining the netball team.

The other main difference between university life at home and “uni” life in Australia, is that classes here are subdivided into lectures and tutorials which each meet once per week. Rather than having a class meet multiple times within the same week like at home, each class meets once per week. This allows me to have Mondays off, which I am very excited about.

Below is my schedule at ACU this semester!


For sake of comparison, this was my schedule last semester at Gannon! The amount of time in class is similar, but classes only meet once per week at ACU.


Lectures are designed so that professors have about 2 to 3 hours to offload the information that students need to learn. Lectures are not usually mandatory, as most are recorded and posted online, but my student visa requires me to attend at least 80% of my classes. Tutorials are designed to be a smaller forum in which to ask questions, and they are usually about an hour long. At ACU, my lecturer and tutor are the same person for each subject that I am taking, but I don’t think this is the case at larger universities.

My Nutrition class reminded me a lot of my Gross Anatomy lecture at home because it was set in a large lecture hall. Thankfully, however, I found that its subject matter was easier to comprehend. Although they last longer than at home, the classes I am taking at ACU are keeping my attention. I am finding my Australian Literature class to be especially interesting. One of the first questions that the professor asked the class was “who has read anything that qualifies as Australian literature?” I was very surprised that I was not the only person who did not raise her hand! In fact, more than half of the class had never read a book that was written by an Australian author or dealt with an Australian subject. In this class, we aim to analyze how the issues such as race and gender flavor the Australian culture, and I am excited to be able to use this class as a means to truly understand the Australian culture. I will have to read and analyze an Australian novel for my final exam in this class (currently, I don’t know of any and am very open to suggestions).

On the first day of my Australian Literature class, we discussed “the Australian identity” as it is portrayed through literature. 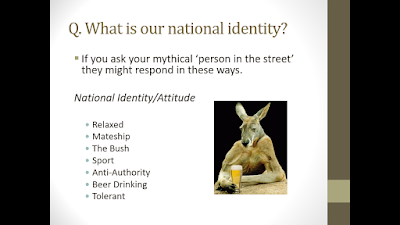 According to this slide, which I stole from my professor’s powerpoint, the Australian national identity is relaxed, characterized by mateship (like a generalized friendship that exists between all Australians) where a sport is a source of national pride. We cited examples of how these characteristics fit the Australian national identity. For one, students call their professors by their first names (so we can thank Simon for these slides). Also, Australian society tends to be relaxed and embrace mateship because it is non-hierarchical. I was interested to find out that Australians tend to respect blue collar workers more than white collar workers, which is the exact opposite of life in the United States. I was also surprised to learn that class in Australia is entirely different from financial status.

I found my Philosophy class to be very interesting as well. Usually, I dread philosophy. However, I liked the way that my professor encouraged group discussion. He reminded us that philosophy is a reasoning skill to be developed rather than a bunch of information to be memorized - (“philosophy is knowing HOW rather than knowing THAT”). In our Tutorial, he asked us to consider the role of education, and we considered the difference between instrumental education (education that is good for another goal) and inherent education (education that is good in itself). His final message to us before dismissing the tutorial was to appreciate the value of inherent education, which stuck with me, especially as the classes I am taking at ACU are far outside the realm of my major at home.

In fact, the role of a Physician Assistant does not even exist in this country so I have to explain that I am studying to be a healthcare provider that plays a role somewhere in between that of a doctor and a nurse! I guess the good news about not having Physician Assistants in Australia is that I am guaranteed to come home at some point -- so don’t worry, Mom!