I arrived in Australia just 8 days ago, yet I’ve been able to cross off a quite a few things from my Australian bucket list in just that short amount of time. I toured the Sydney Opera House, fed a kangaroo, climbed the Sydney Harbor Bridge, tried Vegemite toast, and saw a rugby match! Quite a lot has happened so far so I’ll spare the details and hit the highlights.


My study abroad journey began on July 3rd, just between my brother’s graduation party and our annual Fourth of July extravaganza on Honeoye Lake. My entire family (grandparents, aunts, uncles, and cousins from both side of the family) met at my house to send me off that morning. The realization that I wouldn’t see anyone in my family for the next five months hit harder than ever that morning, so naturally the floodgates opened once or twice that day. Thankfully, FaceTime and Facebook Messenger has made the distance feel a lot smaller than it actually is.


That night, I boarded a plane to Los Angeles, where I stayed with my aunt’s friends, Cuz and Val, for 2 nights. I was able to celebrate the 4th of July (my favorite holiday) with them and be a beach bum for a couple days. Not only did my layover in LA help me to break up the travel time, but it was the perfect buffer time between leaving my family and moving to Australia. While I was in LA, I was able to see my friend Luke, who is currently living in LA and working to make it in the music industry. I thought about how he, as well as my aunt and uncle, are good examples of people who had to fly the coop to find what they wanted. My goal was, and had been for a long time, to study in Australia so now it was time for me to make it happen.


On the day of our flight to Sydney, I met up with Leanne. She had also been staying in LA for a couple days, and we spent the day together at the beach to tire ourselves out in hopes of getting some sleep on the plane. Surprisingly, I was able to sleep for at least 8 hours of the 15-hour flight thanks to the fact that the lights were dimmed appropriately to adjust to Sydney time. 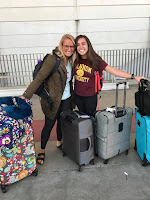 When we arrived in Sydney, there was the most beautiful sunrise over the tarmac which I thought represented well the journey that we were about to begin. Leanne asked me if I was emotional (because I usually am in these type of situations), but I was more excited than everything. I felt like I had prepared myself as best as I possibly could have and now I just needed to go for it! However, I was glad that Leanne was on the same flight as me because we were able to help each other through customs and to the meeting point, where we found Liz and boarded the shuttle to our hostel with the rest of the “Semester in Australia” crew.


Our first day was very laid-back as we were all trying to get over the jetlag, but we had an early start on the second day as we set out for the Harbor. We walked through the Sydney Botanical Gardens, into an art museum, and then to a coffee shop, where I guessed my coffee preference to be a “flat white” and was wrong. We continued our walk through the park adjacent to the Harbor, until we were within view of the Opera House. (Does anyone remember the sound of the man’s voice singing opera in Finding Nemo when Marlin and Dory finally make it to Sydney? Because I swear I heard that voice in my head when I saw the Opera House for the first time). We all started frantically taking pictures and confirming the fact that we were in fact, in Australia. 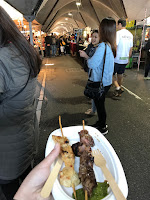 We all split up for lunch, and I ended up trying kangaroo and crocodile skewers! Both were delicious! The kangaroo reminded me a lot of venison, while the crocodile kind of reminded me of chicken but really deserved its own category. While waiting in line for the skewers, an Australian man pointed out the irony of eating the national animal. Later that day, we boarded a cruise around the harbor! We all shared some champagne and took in the views. We disembarked, and then immediately began our pub crawl! There was a bachelor party happening at the first bar, and the groom-to-be dared me to buy him a drink... so at my first time ever at a bar, I bought a grown man a drink. The fun continued from there as we went to 3 more bars in Sydney, the last with a very impressive view of the Opera House in the night time. 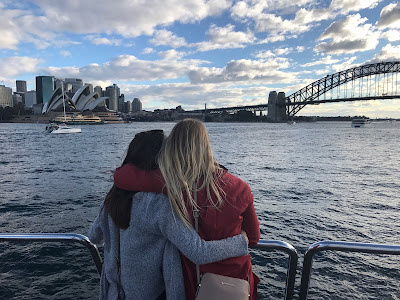 After the pub crawl, we went directly to a rugby match! I feel that I generally understand rugby as I combined my knowledge of soccer and football to figure it out. Rugby is an interesting combination of the 2 sports because it combines the quickness of soccer and the brutality of football. There are 2 types of rugby in Australia. There is Rugby League and there is Rugby Union. I assumed that they were 2 different levels of the same game, but interestingly enough, the 2 organizations have different rules! (I am still trying to figure out the difference and which game I actually saw!) 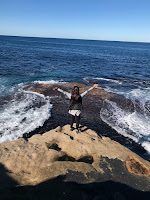 On day 2, we went on a coastal walk from Coogee to the world famous Bondi Beach. The views of the ocean were breathtaking… or maybe I was just out of breath from 5 mile walk, who knows! Bondi Beach was actually smaller and less crowded than I expected it to be, but that is partially because it is winter in Australia and only crazy tourists like myself would want to swim in the water.

On Day 3, we went to the Blue Mountains! 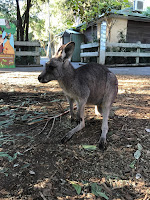 We started the morning at a wildlife reserve in Katoomba. As soon as we walked in, we were greeted by tiny kangaroos called “paddymelons” who were excited to eat out of our hands. One little guy had his entire little paw resting on my pinky finger as he ate out of my hand, and it made me melt. We also saw some koalas! Koalas sleep about 22 hours per day as their body digests the toxins in the eucalyptus they eat, but we were able to see one up and moving! We also saw a bunch of sleepy koalas perched high up in the trees, and I was interested to see them balancing on branches as they sleep in fetal position!

Afterwards, we went up to the Blue Mountains. Our guide was exactly what you are imagining when I say Aussie forest guide, and it totally added to the experience. He was able to point out webs of the Sydney Funnel-web spider, which is the most venomous spider in the world! He also told us the legends of the famous Three Sisters Rock Formation!

Day 4 was our free day, so Liz and I took the opportunity to climb the Harbor Bridge! The climb took about 3 hours- it took a full hour to get us suited up in our extensive amounts of gear and practice climbing with the clips and belt! From the top of the bridge, we were able to see all of Sydney, from the Blue Mountains to Manly to Watson’s Bay. Two interesting facts that I learned during the climb is that the large concrete pylons in the bridge’s structure are not necessary for the bridge to stand. I also learned that the weight of the Opera House is three times more than that of the entire Harbor Bridge!


What interested me most about the Harbor Bridge is that the Climb is run by a private company! The owner, had the great idea to make it happen and now makes close to $50,000 a day on it. I felt an appreciation for the same type of ingenuity to an even stronger degree when I toured the Opera House later that day. Jørn Utzon, won an international competition for the design of the Opera House. He submitted nothing but a sketch, yet his design was chosen despite not giving any indication of how to build it. It took Utzon 3 years just to figure out the geometry that would allow it to stand. The construction of the Opera House cost about 15 times more than the original budget! What I appreciate about the Opera House, besides its incredible beauty, is the commitment to “making it work” as shown during its construction. Walking into the Opera House, I was absolutely stunned by the colors of the reddish wood and the purple carpets, the angles of the walls, the large window overlooking the Harbor, and the sense of grandeur in general. If I am ever able to return to Sydney, I want to see a show at the Opera House.

On our fifth and final day, I had to prepare to say goodbye to Sydney. Nolan and I woke up early to fit one more excursion in before our 3 PM flight. We boarded the train to Watson’s Bay, the very edge of Sydney where the Harbor opens into the ocean. We found a fabulous lookout point, where you could see the ocean on one side and all of Sydney on the other side. As we swiveled our heads back and forth to take it all in, we noticed a rainbow over the Sydney skyline which made the view even sweeter! We were even able to watch a storm pass from the ocean over Sydney (and pour on us in the process). When the rain eased up a bit, we were able to find a cute beachy place called the Watson’s Bay Beach Club! (I found out that they do weddings there too, so please save my date location!) I ordered a Long Black and we enjoyed the coffee and views while waiting for the ferry back to the city. 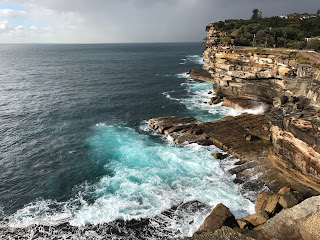 We definitely maximized our time in Sydney, but I still would have loved some more time there! Now, I am getting settled into my new apartment in Brisbane, where I will be for the majority of the semester!
Posted by Unknown at 7:18 AM